The TRUE Story Behind the Haunt

We’ve always been sort of proud that our haunt has been (loosely) based in actual local history – in particular, the railroad, businesses, and people which drove the development of this town over the last two centuries.  For what it’s worth, the Town of MA was so impressed with our use of local history, that they recognized our haunt and it’s value to the community.

A pivotal element to our haunt has been the Garrett Sanitarium.  The facility was a pretty important part of Mount Airy’s history and its history is almost more fascinating in truth, than it is frightening in our haunt!

That’s an actual photo of the Nurse’s Quarters, Hospital, and Pavilion.

The Sanitarium was opened by Mary Fricke Garrett and her husband, Robert Garrett.

Robert was the President of the B&O Railroad  The Garrett’s were quite wealthy, though Robert was tortured by the politics of running the railroad, the untimely death of his brother, Harry, in a tragic boat accident on the Chesapeake, and persistent rumors he somehow contributed to the death of wealthy railroad magnate William H. Vanderbilt.

In the summer of 1887, Robert Garrett, purchased 47 acres on the North Main Street hill, opposite the present elementary school.  Garrett, and his wife, Mary, set about constructing a hospital, contagious disease building, nurse’s housing, servants quarters, a morgue, and a small graveyard.  The property was bounded by Main Street on the front of the property (east), and Buffalo Road to the rear (south and west).  The extent of the property’s northern boundary is unknown to us.  And that missing fact is important. 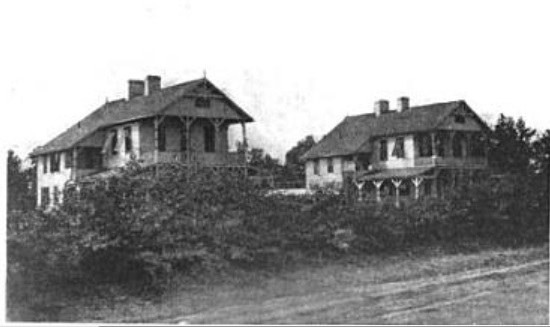 The institution treated tubercular and contagious diseases and from its opening in 1888, treated hundreds of children in its Hospital and in the Sanitarium.  The B&O Railroad for many years ferried ill children and their parents from the Baltimore area to the Mount Airy Railroad Station for medical care in the Garrett Sanitarium.

This is the rail line, looking west toward Linganore.  Past the rail station is the old Runkles Mill, which, like so much of downtown, was consumed in a massive fire early in the 20th Century.

It was believed that the fresh air, which seems to always caress Parr’s Ridge, helped in the treatment of lung disorders, particularly tuberculosis.

Mary and Robert paid for it all…rail tickets, care, feeding.  They were truly philanthropists in an era of robber barons and magnates.  Mary even tried to find space for the parents who traveled to be with their children.  Mary was quite a good soul.  She cared for others…and that’s rare now.

Over time, additional buildings were added and the sanitarium spread between Mt. Airy’s North Main Street and Buffalo Road.  Children who died while in Mt. Airy were actually buried in a small graveyard located on the sanitarium grounds.

We can’t verify it, but this is purported to be the rear of Garrett, looking west to what is now Summit Ridge.

I supposed it would be interesting to learn what became of that graveyard…It most certainly is only steps from the site of our haunt.

I mentioned the northern boundary of the property i not known to us.  As you can see below, this is important.  Since the buildings were located in the circled area, the graveyard would definitely have been away from the buildings – to the north.  What is now north of that?

Summit Ridge and the haunt site

We just hope the lost children’s cemetery is not UNDER our haunt!!!

Mary was quite a lady

She poured her soul and a healthy piece of her fortune into the children in hopes of giving them a better day.  Her philanthropy was widely-recognized And sadly, her husband would leave her too early

The cause of his death was listed as “chronic nephritis,” or kidney failure.  But most believed Robert succumbed to his own mental demons.  From 1887, until his death 9 years later, Robert plunged deeper and deeper into poor mental and physical health.  He died 3am, July 29, 1896, still tormented by the accusations he had a hand in the death of Vanderbilt, and still reeling from his brother’s death in a horrifying shipwreck in the Bay.  It is said that mariners heard his brothers’ screams for help dissipate in the pitch dark cold night air.  They could do nothing to save him.

The Steamer Joppa, which struck the Yacht Gleam, sinking it and killing Robert’s brother Henry.

That never sat well with Robert.  Mental distress all but destroyed him and his body eventually gave out as well.

Mary kept plugging away.  She remarried, eventually, and the Sanitarium eventually closed.  It was reported to be vacant by the early 1930s.

One of the coolest things we discovered in our research is that a portion of the Garrett Sanitarium is still visible today – hidden in plain view!

You’ve likely seen this cute little home on Main Street, across from the Elementary School.  That’s home is built on the shell of the old pavilion seen in the black and white photo.  It was the pavilion where patients could once sought exposure to fresh, clean Mount Airy winds.

It stands as a sentinel

A tribute to the children

A monument to Mary